It’s a terrible thing to feel like a man condemned. Especially when you’re living in the first world and your only complaint is that you have to go back to work next week. But the nostalgia evoked by the last few days of August never fails to take me back to my childhood and those long days spent bass fishing with my father on the local estuary. The bass possessed a legendary status in my household; we lived on the edge of town, about two hundred yards from the sea.

Our home stood near the top of a steep hill, at the bottom of whose western edges there skulked a large, ancient farmhouse. Its adjacent fields stretched all the way out into the countryside, bringing us into contact with skylarks, foxes and bats- all of whom still dominate the area today. If you walked in the other direction, south down the hill, you came to a large gap in the cliffs which was known to the locals as ‘The Chine’. To descend it meant access to a world of rock pools, crabs and in the summers- bass… It was a boy’s paradise.

For years I never got past its entrance. Well, not with a rod, anyway. But at some point my father deemed me old enough to pass through. I’ve been a bass angler ever since. The season reached its zenith in late summer when the holidays were running perilously low on ‘days left until school’… If I think hard enough, I can still remember how the fish looked to my young eyes: as though mithril-clad; there is no silver that sparkles as brightly as a bass just out of the ocean. The taste of those summers also lingers; like a combination of ice cream and sea salt. All these sensations would wash over me in the subsequent months, as I sat trying to digest a diet of Latin and algebra in dusty, mahogany-clad rooms.

I’ve had some luck with the bass this year, but not a lot. I went for a lovely river walk last Friday, though. My favourite patch is just a few miles inland of the estuary I fished with my father all those years ago. As though to further sharpen this symmetry, the water here is populated by perch, which are in fact evolutionary relatives of bass.

One fish went south and eventually evolved into an ocean-going, silver hunting machine; the other went north and by degrees, developed the famous stripes (or rather infamous, if you’re a roach) that mimic the river reeds from which they pounce. Both species retain enormous mouths- and of course, the signature mark of their bellicose order: a huge set of menacing spikes where there should be a dorsal fin.

I managed several fish, two of which were well over a pound. The larger of the two took a small lure (that imitates a tiny perch) which I lowered up and down next to some reeds. His sibling took a worm fished underneath a lovely, autumnal-coloured bobber. I enclose a photo below of the second fish, whose stripes were more vivid.

Having caught all my fish early, and in the first spot of my planned wander, I put the rods back in the car and decided to walk the rest of the route with some binoculars. I didn’t need the latter to spot the swans… 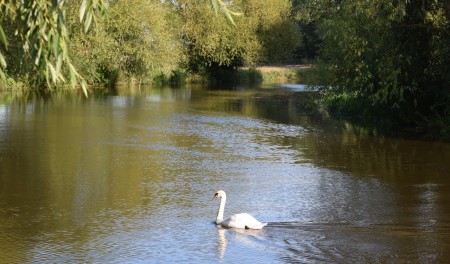 … But they did help with the kingfishers, who seem to be revisiting their winter hunting grounds. The breeze is just that tiny bit cooler now; the annual ‘panic-gorge’ can’t be far off. There were also lots of warblers- of several types, although I’m terrible at differentiating them. I played a nice game of hide and seek with some chiffchaffs, one of whom eventually relented and allowed me to take her picture.

Such a pretty bird. This one was incredibly agile, performing various loop-to-loops and other aerial manoeuvres before sitting regally among the damsons.

I assume that these local birds are migratory, as I don’t see them in the winter. In keeping with the season, they didn’t sing much; just the odd chirp. As the sky darkened, they fell completely silent and retreated deeper into the foliage.

I walked the fields next to the river until it was dusk and the bats came out. I’ll go back to the bass for a while now, or else I’ll regret it when they’re gone in a month or so.

By then I’ll be back at work, and these precious days will join the river of other, older memories that runs through the back of my mind.