Ramsgate’s chief seat of Squirreldom is undoubtedly King George VI Park. The whole estate used to be owned by Sir Moses Montefiore and I suspect he imported them to lend the place some transatlantic charm. Anyway, they drove out the native ‘reds’ and ruled with an iron fist until the parrots turned up a century later. Well, the ‘rose-ringed parakeets’ to be precise. Fugitives from private aviaries, they turned up about thirty years ago and are just as ambitious as their nut munching nemeses. But they are far more colourful, much louder- and can fly.

I have a bizarre theory that the two species cancel each other out; I can’t prove it, but I think they compete on some level and that this allows the park’s other poor species some breathing space. Despite the opposing green and grey goliaths, the smaller creatures- the finches, tits, woodpeckers (green and greater spotted), thrushes and starlings- all seem to be prospering. But then I’m an eternal optimist.

My own family arrived in Ramsgate during the 1920’s; they came from Wales to mine the local area, which is rich in coal. My nanna met my grandfather whilst on a day trip down here from London. In turn, her family had emigrated from Ireland. In any case, we beat the parrots here. But we lack the nutty grandeur of Ramsgate’s ancient Squirrel Families. And can only look on in awe at the pedigree of the mighty Whiting Clans, who have been wintering along the town’s shoreline for millennia.

I maintain an annual tradition of trying to catch the latter creature from the local pier. I only go after them two or three times in a season and usually make the first trip in early November- just as the autumn is ending and the long, cold nights start to draw the fish in closer to the shore. I look forward to catching them, and even more to eating them as I prefer the flavour to cod (which is just as well these days). But I’ve been busier than I like to be and couldn’t make it out this year until last week.

The view from Ramsgate’s Kent Steps is lovely. I bought my bait from ‘Fisherman’s Corner’, an Aladdin’s Cave for anglers where three decades ago I bought my first sea rod, and then climbed the ‘Steps’ up to Madeira Walk so that I could look down over the harbour; it’s impossible not to look back when you reach the top. The terracotta brick work and copper dome of the Ramsgate Custom House were built in the late 1800’s. Around the same time old Moses was releasing the Grey Scourge at King George VI’s- just a few hundred yards eastwards.

I was thinking about this and decided it was too early to go fishing. It was an hour before dusk (the whiting feed better after dark) so I decided to stroll along the cliff towards the park. I love this walk, not least of all as it enables me to pay a visit to one of my favourite places in Ramsgate-the Art Moderne lift on the East Cliff. During the summers I used to ride up and down in it with my nan and my mother, having walked and talked along the local promenades.

England will never get over the Victorians. The scale of their ambition persists in our attitudes, survives in our pursuits and dominates our vistas. They installed the blueprint for much of today’s country, including its parks. Queen Victoria herself used to walk in this one. Well, back when it was an Estate, anyway. She used to stay as the guest of Montefiore. I wonder what she’d make of the modern entrance…

I suppose it’s seen better days, but then Ramsgate itself has seen far worse. In 1941, Moses Montefiore’s Estate was made public and renamed King George VI Park. Not so long afterwards, the Luftwaffe destroyed several hundred of the town’s homes in one day alone. The town boomed in the 1950’s but by the 1980’s it boasted one of the highest unemployment figures in Europe. Crime rates soared, the cold war started to freeze and leather clad Mohicans staked out the town centre in-between dole interviews. One by one the shops all closed. Pubs, too. Whatever ‘boom’ was going on in the City of London, it had a far worse effect on the prosperity of the town than all of Hitler’s bombs put together.

For a boy, the Ramsgate of my childhood was a romantic paradise of abandoned buildings, hobos and social decay. I’ll be honest and say I loved it. But the experience would have been very different for many grown-ups. Roll on three decades and the town is again fashioning itself a new identity. Global populations are shifting. London cannot hold etc… We’re being invaded by an army of city-quitters who bring money, stories (many untrue), hope, glamour and despair. Dangerous new cliques are forming. They shop at Waitrose, drink Kentish Ale and talk about the ‘nouveau left’ in the corner of newly (and beautifully) restored Victorian pubs. Clashes with the provincials have been inevitable. Personally, I say good luck to them.

For the animal kingdom, ignorance is bliss. The park soon shook off all my clifftop reminiscences and petty nostalgias. I was instantly greeted by a squirrel who thought he was Tarzan; I stalked him for thirty minutes as he bounced about from tree to tree.

I saw parakeets. Lots of them. But I couldn’t get close to one, even with my telelens, until dusk started to come on. Then they became docile. They stopped flying away and started simply to watch me- almost disbelieving that I should still be there. 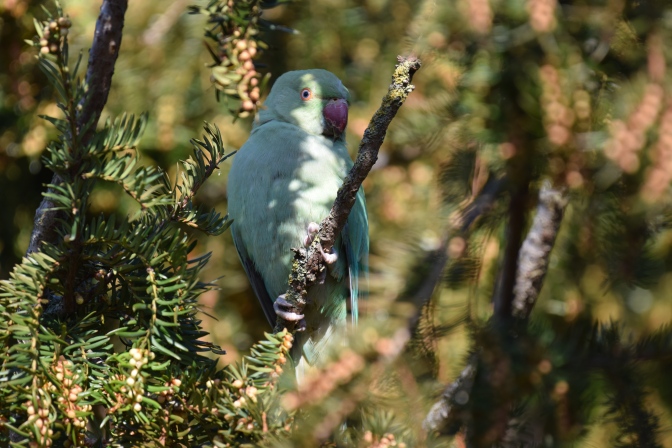 Finally they settled in the thicket nearest to the park’s Broadstairs entrance and began to move in and out of a series of holes in the trees. I saw a flash of green between the branches and aimed my camera at it; after about thirty seconds, a bird came out and stared right at me. 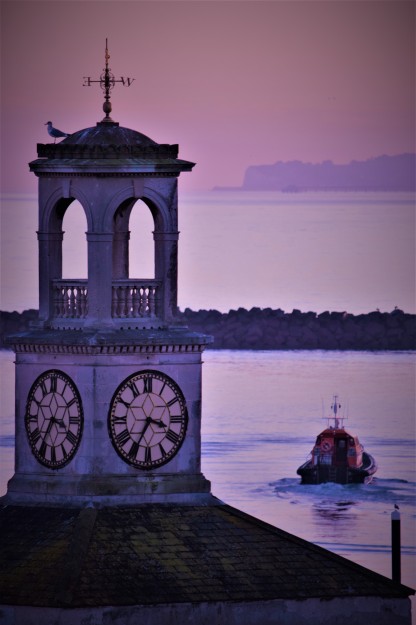 By now, dusk was in full swing. I had captured a parrot, so to speak. And a squirrel. Now it was time to catch my dinner. I walked back to the Kent Steps and then hurried down onto the so-called Ramsgate Pier (in reality it’s the harbour’s outer wall). When I arrived I could see the pilot boat going out to sea. Both the sea and the sky had that lovely Arctic tinge they seem to develop locally in midwinter.

Just as the day was ending, I set my tackle up and waited for black-out. Observing winter dusks seems to be as much a habit for me these days as the ‘dawn watch’ is in the summer. I feel more alive at these times than at any other. Like the whiting, I’ve been returning to this spot for nearly thirty years; life gets in the way, but I always come back.

To a rhythm so familiar it feels as though I never left. Like it has all been one long dusk and that it won’t ever end. But then the sun starts to dip and the rod tip starts to rattle. The full romance of the night comes upon me and I’m not so sure I feel the same way I did as a boy.

However I still always think I’ll catch a fish.

But then the angler is an eternal optimist. 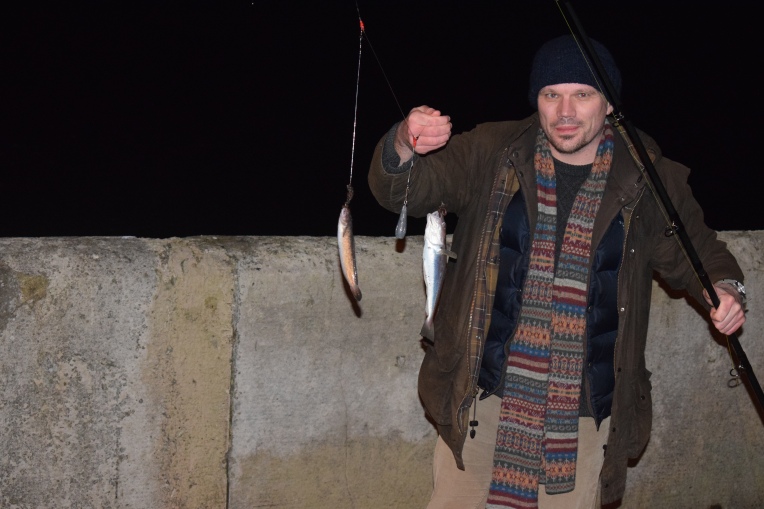 6 thoughts on “The Ramsgate Parrot, Squirrel and Whiting Run”