“I believe in everything until it’s disproved. So I believe in fairies, the myths, dragons. It all exists, even if it’s in your mind. Who’s to say that dreams and nightmares aren’t as real as the here and now?”

Read on if you’d like to encounter dragons, fairies (and even fish) in their most favourite environment: an English jungle. Well, not so much the dragons. More like dragonflies. Actually, damsels, really. And damselflies at that. But when you’re staring at a float in the midday sun, the mind’s eye can do funny things.

The damselflies’ favourite part of the estate lake at Bury Hill is the so-called ‘Jungle’; a vast collection of interwoven trees and bushes that line the distant back end of the pool like a giant horseshoe. Here there is no division between land and water; rather, the tree roots and brambles spill freely into the lake to create a boggy, leafy angler’s paradise; an electric atmosphere in which to fish.

Jungles fascinated the upper classes of the era; like all the English, they loved the idea of not quite knowing what lurked beyond the end of the garden. Quite charmingly, the word itself is Hindi and translates as ‘wild or uncultivated land’. It made its way to Mother England from the Indian Raj some time in the 1800’s- and was in good company; other words we circuitously inherited from the subcontinent include ‘dinghy’, ‘pyjamas’, ‘thug’ (the name given to the travelling bandits formed during a regional rebellion), ‘nirvana’ and, most important of all, the life-giver: ‘Curry’…

So there you have it. A thug on a dinghy in a jungle. With a penchant for curry. The gods of fishing could surely not be blind to this rare alignment…

I’d arrived early for once, and soon I was drifting excitedly- but slightly uneasily- along the strange banks of this angling ‘nirvana’ (sorry- couldn’t resist that). Far from the shoreline and only accessible via punt, you cannot help but feel like Marlowe in Conrad’s ‘Heart of Darkness’: very slowly inching upstream toward some gory but compelling discovery. In actual fact, it is all a great trick. A fascinating Victorian-made folly. The ‘Jungle’ is wide but doesn’t extend further back than perhaps fifty yards in any given spot. However, you can’t see past the first waterlogged ten feet or so. And what your eyes can’t see- your brain instead begins to imagine…

This is the very quality that makes the jungle so bewitching a siren to anglers; it’s the perennial problem that you can’t quite ever solve. Still – like the boy who discovers a secret pond or an abandoned old tree house- you can’t help but keep looking and staring into it for hours, searching for signs of life. Bubbles, shadows, branches moving against the breeze etc… Periodically your trance is broken and suddenly you’re staring into nothingness. An abyss of natural neglect. At these times, you feel all washed up and abandoned in a faraway place. But gradually you relax- and little by little your gaze is drawn back in.

I attached my new float that I’d bought for the trip, and cast off. I’d plumbed the depth; it averaged about four and a half feet but I’d found a deep, dark hole amongst the branches that went down to about six feet. The space had been created by the competing roots of two old oak trees and it tunneled right down into the jungle itself. Perfect, really. And very, very intriguing. Such a dark and mysterious hole is the perfect summer hiding place for a big tench.

Conversely, when the weather cools and the tench leave for the great deeps in the middle of the lake, the perch will move into a spot like this and take up winter residence. Perhaps I’ll remember and return. These close-up, ‘ambush’ tactics (for lack of a more romantic term) are the quintessence of summer angling for me and most of my tench fishing involves this kind of approach; creeping up on them, basically. You plan, you prepare and you follow the basic tenets of angling, but beyond that it’s a contest between you and Mother Nature.

So, in full stealth mode, I cast my float into the hole. I then fixed a brew and began to recline. It wasn’t long before waiting became anticipation- which only an angler can understand. Here and there, I also thought about my approach. Not quite doubts. Not yet; but even when perfectly confident, your mind will question your tactics at some point. The bait was two small worms; I swear this is a bait that a tench simply has to accept, even if it’s not particularly hungry. I was using an insanely beautiful float, styled on a vintage design. But this particular piece also possesses state of the art balance and build quality. Like the Knight in UA Fanthorpe’s poem ‘Not My Best Side’, it practically screams at the fish: ‘Don’t you want to be captured in the most contemporary way?!’

The maker, Andrew Field, fashioned it from a delicate quill that is usually employed for crucian carp fishing; he beefed it up slightly and then added the classic body and buoy-like tip of a real tench float so it could beat any ‘drift’ on the lake. Perfect for this type of depth on a big water. Big enough to stay put, but light enough not to scare off the tench when they (inevitably) take the bait. I also thought of the float as a good luck charm; there are, in fact, ancient crucian carp in this lake- some of which weigh well over four pounds. They’re not abundant enough to ‘target’, so to speak, but they are occasionally caught by tench anglers. With a tench float made from a crucian quill, I was surely going to be in the lake’s good graces…

And as I stared at its bright red tip, the rest of the picture began to fragment. What had seemed like the integral parts of a ‘whole’ landscape, slowly broke away and became distinct. Firstly I became aware of the different types of birdsong. There were goldfinches chirruping some thirty yards to the southeast of the punt; whilst beyond the float I could hear a song thrush- always later than the blackbird- finishing his morning ballad. Further into the undergrowth, I could just detect the muffled giggles of a greater spotted woodpecker.

Then the smells began to grow stronger. Firstly the scent of the lilies yawning and then, as the mercury rose, I felt overwhelmed by a great shower of dandelion seeds. I was becoming badly sunburnt, but felt powerless to move- so deep was my state of hypnosis. The float, and everything near it, seemed enormous. Trees developed distinct features that hitherto I hadn’t perceived… When it started to occur to me that the damselflies resembled small dragons, I knew that my sojourn from reality was complete.

The Jungle now held me completely in her thrall.

After a while, some fairies came and joined us: a company of twenty or so long tailed tits (although I prefer the name ‘old red eyes’) nestled in the woods near my boat and started to gambol charmingly about between the branches of the jungle. Like candy floss on stems; their tails are actually bigger than their entire bodies. I find them very inquisitive and unafraid of humans. Fairies really, these ‘little people’ set the dragon-damsels off beautifully. The whole atmosphere of the place was intoxicating. The magical creatures, the angle of the float, the lilt of the punt… Until eventually the trance deepened into drowsiness…

… And then sleep!… As I realised my error, my flickering eyes could just about discern the tip of my float sliding down into the depths. Smells, sounds, fairies and dragons all retreated as I pulled myself out of dreamland and struck hard. Hard enough to pull slack line up, but not hard enough to connect. I cursed myself as I reeled up the slack, but then nearly jumped out of the punt when the line went solid- very solid.

The fish was hooked and it felt decent. I got it into open water and attempted to play it away from the jungle. No good. It made a series of spirited, no, terrifying charges back into the woods and would have beaten me outright if it weren’t for the strong line that I was using; much sturdier than I would normally use for tench. A necessary insurance against the malice of the jungle. The line held, but my rod perhaps wasn’t fully up to the job. It bent to the point of snapping but ultimately did hold. Just. It made for an exciting battle, but a bigger fish may have made mincemeat of me. When the fish finally surfaced, I could see it was a nice tench. Almost five pounds; an excellent size for a float fisher… But my experience with the rod had left me shaken.

I stayed awake and alert(ish) for the rest of the day. A subpar rod is one thing, but a sleeping angler would be the ultimate gauntlet to lay down to these fish; I would soon find myself floating home if I drifted off again.

As the day progressed, I missed two further bites by striking too early. Then, an hour before rowing back, I hooked one more tench: a four pounder. Another amazing battle ensued, similar to the last. My only advantages were being more alert this time round- and shirtless, which probably frightened the hell out of the poor fish when it finally surfaced.

A clear blue sky had started to gather clouds by the time I packed the car up. Tonight I was staying somewhere else: the ancient (and haunted) ‘White Horse’ hotel in Dorking- just a couple of miles away. Tomorrow I would return and try the lake anew. But before doing so I intended to call into town and buy a new, stronger rod from the local tackle dealer. And prior to all that I had drinks to drink and curries to eat and, apparently, ghosts to see.

And all the while, the clouds kept growing. I thought about this as I drove away from the lake and back up into the woods- sorry to leave the fairies, but safe from the dragons… 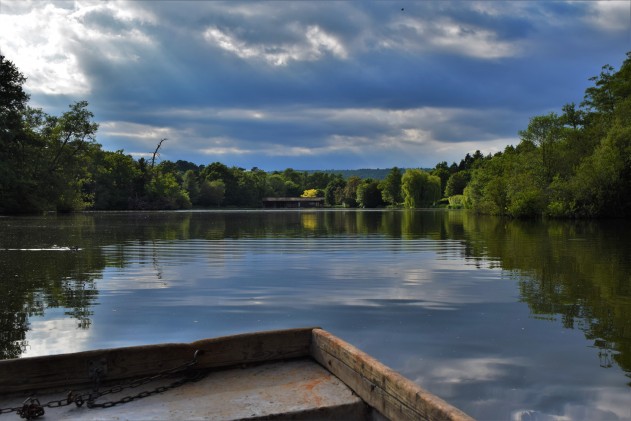 2 thoughts on “Dragons, Fairies and Jungles”