Like all true Thanetians, I was born in Margate Hospital. In the old grounds, of course. Well, it was the 1970’s. A few hours later I was transported to Ramsgate and into my first home, a small house behind the vicarage at St Laurence Church. And there I learned to walk, talk (sort of) and most importantly, spot birds. Like many churches in England, its gardens are now managed to assist the resident wildlife. The lawns and bushes are trimmed in places but in others they are allowed to grow wild; this means more lovely butterflies for us to gawp at and more insect life for the birds, bats, foxes and mice to feed on. The result is a stunning combination of history and nature. Macabre as it may sound to wander abroad in a lonely graveyard, where else can you experience such a stunning combination of Norman and Victorian Gothic architecture, whilst at the same time being serenaded by blackcaps in the spring and goldcrests in the autumn?

The grounds at St Laurence Church are three and a half acres in size. This may or may not sound big to you. But it’s all a question of perspective. To a bird, that’s an entire world. As a toddler, I felt as though I were peering into a vast and mysterious jungle. As an adult, it fills me with a foreboding sense of the English eerie. It’s also a place that demands respect; after all the church looks after many dear departed, some of whom have rested here for a very long time; the main building is over 900 years old. But its spirits are likely to be far older. As Christianity spread throughout England, most new churchyards were built on existing pagan burial grounds, to save reinterring the dead. The bird-spirits are amongst the very oldest to visit this site, and have been coming for millennia. For many it’s their home all year round, but to others it’s an ancestral resting point. Being just a mile from the English Channel, it’s long been a beacon for exhausted flyers.

We lived in the small row of houses that forms the northern border of the churchyard, only moving out when I was five or six. So for a while, I was one of the smallest (and noisiest) souls to haunt the grounds. The jays were among the first spirits I encountered but it was a while before I glimpsed one in its entirety. The small army of crows and jackdaws took that prize. Anyone living near St Laurence during the early 80s will remember one jackdaw very well. This particular bird could talk; well, he could utter basic phrases.

Our first experience of the bird was when he landed on my father’s bare shoulder and started squawking ‘Nuts’, ‘Hello’, ‘Nicey, nice’ and other utterances. My dad was sun-bathing in a deck chair and it was one of the first times I saw him alarmed. His newspaper went everywhere, as did his tea, but the jackdaw held firm. It was as though the bird were taming him; gradually, he slumped back into his chair and began to call my mother. As well as talking, the bird seemed able to listen; at the least syllable we uttered, he twitched and moved his head in response, as though hanging on our every word. He could also impersonate laughter, or something approaching it. In between asking for nuts, he’d let off this awful, pirate-style cackle. A rumour circulated that the hermit who lived in the end-house had rescued the jackdaw when he was young and subsequently taught him some phrases. In any case, he harboured scant fear for humans; a dangerous inclination for any animal. Happily, the bird enjoyed celebrity status (not to mention a near-endless supply of peanuts) among the families living near the church, so he never had to stray too far into the outside world.

A neighbour found him dead in her garden one winter morning, old and grey- with no marks of attack or illness. He had simply died of old age. Several of the neighbours buried him at the back of the gardens, just inside the church grounds. The area is under a leaf canopy all year round and only a few shafts of light penetrate the jackdaw’s burial site. The area is frequently used by the gardener, who stores bags of compost and leaves there. A busy fox den is located nearby and the squirrels build a drey there each winter, too; the child in me likes to think the old bird’s ghost is kept company.

As I neared school age, the subtler spirits of the yard began to reveal themselves to me. I can remember my first proper view of a jay. It was autumn, my mother and I had walked from Newington playschool and cut through Nethercourt so we could call in at the ‘Maid Marion’ store, opposite the church. I now suspect that my mother used the longer route to burn off some of my energy. I used to call the old lady who ran the counter ‘auntie’; she wasn’t my auntie but the parish of St Laurence back then played host to an army of old folks whose names I couldn’t remember. Many had fought or participated in World War One and a few could just about remember when the parish was a village, rather than an appendage of Ramsgate. As an easily bored toddler, I remember being the recipient of many boiled sweets and cheek pinches.

On this particular day, I’m almost sure my mother would have bought me a finger of Cadbury’s ‘Fudge’- my regular post playschool treat, before we crossed through the church grounds to get home. On passing into the northern, darker reaches of the yard, I saw what I thought to be a colourful looking crow perching upon a gravestone. As I stood hypnotised by its stare (which nearly froze me to the ground), it spread its wings and was gone. Puff. Just like that. In the wake of its blue fury, I was mesmerized and spent the rest of the afternoon in a state of catatonic reverence; no mean feat for a child who had difficulty remaining still for longer than three seconds… The curse of the jay had struck. And it stays with me to this day.

I subsequently saw a great deal more before the autumn ended. One of the graveyard’s oak trees overhung our back garden and the jays would land to collect the fallen acorns.  My mother must have loved them; the birds settled me faster than ‘The Wombles’ and ‘Willo the Wisp’ combined. I always stood dumbfounded if ever I saw one; a child can instantly recognise the jay’s regal nature. But then St Laurence has played host to many royal spirits down the years- Queen Victoria used to worship here as a child, and two of George III’s grandchildren rest here; they share a mausoleum with a family of pipistrelle bats.

Every autumn, the church welcomes the smallest king of them all- the goldcrest, who flies all the way from Scandinavia to enjoy our milder winter. So-called for his golden crown, the Germans call the goldcrest the King of Birds. Less glamorously, our ancestors called him the ‘Woodcock Pilot’; believing the goldcrest too small to get across the north sea on his own, they surmised that he hitched a ride on the back of larger birds, such as woodcock. I don’t remember the goldcrests from my childhood; they were probably too small and subtle a spirit to be detected by a war-like toddler such as myself. But over three decades later, they fascinate me. Along with the jays, these petite Vikings are one of the chief reasons that I still return to the old yard. Last year, I decided to photograph some. At first, I only got distant glimpses.

But my luck improved as the winter closed in. On one afternoon, without specifically searching for them, I heard that high-pitched, ethereal chiming that accompanies them and looked up to see one bouncing around above me.

Another creature I only ever see by luck is the woodpecker. The graveyard plays host to all three British types.

The rose-ringed parakeet is by far the loudest visitor to the church. And for some, the most unwelcome. I have my reservations (they take over woodpecker holes) but I don’t mind admitting that these birds charmed me some time ago. Back when I used to jog (many years previously), I saw a group of parakeets just after dawn in King George VI park on the east cliff; they were rising up over old Moses Montefiore’s Italianate Greenhouse. I’m afraid that was it for me. The juxtaposition of these beautiful Himalayan parrots with an English Victorian glasshouse felt like an epiphany. Similarly, when I see them dashing over the Georgian mausoleums of St Laurence, it conjures up a swashbuckling, romantic England. So whatever happens, I feel they’re here to stay. But we may need to manage them at some point, so all our wildlife can flourish.

The church-yard is changing. Parrots, collared doves, even wood pigeons to some extent, are all new residents. And they’re not the only ones. The modern world has brought with it new plants, strange weeds and a host of fresh insect life. Even the conkers are foreign; after all, horse chestnut trees aren’t English in origin- they came here from Turkey a mere three hundred years ago.

The local parish is changing, too. The old people I knew as a child are all gone now. There aren’t any survivors left from the first war, and fewer still from the second. New families have moved in. The ‘Maid Marion’ store is now a ‘Gulf’ petrol station. I was filling up there the other week when I saw a boy playing games on his mother’s mobile phone. He looked about the same age I was when I saw that first jay. Britain is changing all over again before our eyes. Perhaps that old hermit at the end of the road feared what was coming. He needn’t have been afraid. The magic of St Laurence is that it endures and evolves.

I’ll continue to walk there from time to time. It’s a lucky place for me, although it can be a little creepy at times and the jays can stare awfully hard. If it gets too much, all I have to do is remember the jackdaw’s clumsy laughter…

It sends even the evilest of spirits sprinting back to their graves. 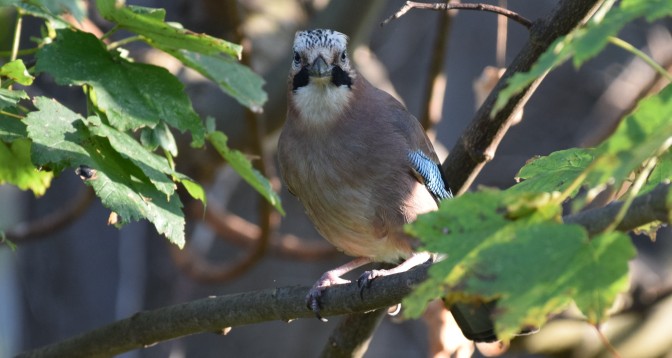 6 thoughts on “The Little Spirits of St Laurence”