“All I know is that you’ve got to run, running without knowing why, through fields and woods. And the winning post’s no end”

– ‘The Loneliness of the Long Distance Runner’

The summer tench fisher is a lone wanderer. The sport is solitary and at times preternaturally silent. It doesn’t matter if he’s fishing a lake, a pond or a drain. The fish he seeks are nomadic, and if he’s doing it correctly (which I rarely achieve) then the better part of his time is spent tracking, rather than watching a float.

For me, the season starts on June 16th. I did once toy with the idea of an earlier, St George’s Day kick-off. The tench is such an English classic, after all- and it is here in the Home Counties where it has its spiritual home. But ritual is important to me in fishing; I wouldn’t describe myself as a traditionalist, but I suppose that others may see me that way.

The fact is, I still live in a child’s world when it comes to angling. I never really got used to the abolition of the closed season, I still mainly use floats or flies- and I stick to a ‘day out’ approach, along the lines of ‘Mr Crabtree Goes Fishing’. When tenching, I pack a rake, a roll-pack and some refreshments, usually tea but sometimes cider or ale, before wandering as far as I can from the noise of the town. 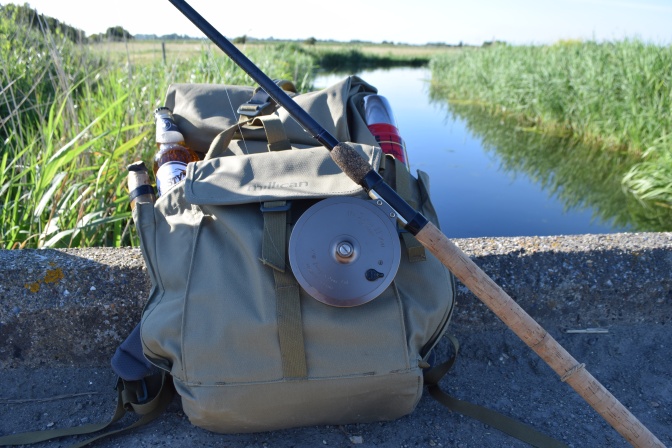 I’m not sure how Mr Crabtree would view my last week’s fishing. It started innocently enough: I went out on the eve of the new season- Friday 15th June- and raked several sections of a lowland Kentish drain before peppering them with bits of chopped up worm as an appetiser. I returned the next afternoon and took a brace of tench just before dusk: a male of 4lbs 6oz- my first fish of the season- and a female of just on 4lbs. Both fish fought shockingly hard- especially the male- and all the more for the long lay off. I only fish for tench in June and July- a 6 week window- before moving on to bass and chub in August. I then progress to perch and finally pike as the temperature cools.

I do try to vary my locations, too. This year, I vowed to limit my time on this particular stretch of marshes. They are a terribly hard place to fish. I’ve only seen tench actively feeding on a handful of occasions and I didn’t take a single fish in over ten visits last season. What drives me is the sheer wonder of the place. I have seen hare, badgers, beavers and there are two hugely impressive marsh harriers that predate the whole landscape, giving it the feel of a John Ford Western movie.

There are also huge fish. Large carp, bream and of course tench, that drift about as ponderously as I do. I try to observe them without being seen. And without upsetting the land-based wildlife, all of whom act as early warning systems to their aquatic cousins. This can’t be avoided when raking or baiting out an area. But later, when one returns with a rod- that’s when the real game begins. The drifting grows ever less ponderous and all the more stealthy until it feels less like a hunt and more like some kind of convergence- and before long, you’re becoming obsessed.

Three nights ago, I again spotted the enormous female tench that snapped my line two summers ago. The one that got away… And about which I’ve bored my entire family, all of my friends and anyone who will listen in my local pub. I’ve also written a fair bit about her- including an article in the lovely ‘Fallon’s Angler’. It doesn’t help that I spotted the fish in an area where I’d earlier seen a marsh harrier. In the mind of a boy-fisher, such an omen cannot be overlooked and already I’m viewing the bird as some kind of pole star. Tench rarely reach this kind of weight (10 pounds at least) on a diet that consists solely of natural food – but it really is that big (my arms are in the classic outstretched position as I say this).

So I find myself star-struck all over again and it may be that I make more trips out onto the marsh than I’d intended.

But I’ve factored in some light relief- there’s a pub near me on the Kentish Stour; the ‘George and Dragon’ over at Fordwich. A beautiful section of chalk-stream winds its way past the tavern and one of its chief residents is an enormous ‘bull’ chub. If my quest for the Queen becomes overly oppressive- then I shall take a break from the marsh and spend a summer’s day chasing the chub; he- or one of his thuggish siblings- will readily take a fly and I can usually catch one or two.

… Whilst secretly dreaming of the giant tench that lives out on the marshes.