‘There was a Marsh’, quoth he…

Twenty years ago I worked as a labourer for several months before going off to University; my father felt it was necessary but I remain unconvinced. It was grotty work- most of it clearing effluent tanks on a local chemical plant- but my one salvation was ‘Old’ Mick, a painter who worked for the same firm as me. Profoundly deaf and one of the angriest, kindest souls I ever met- Mick was also hugely misunderstood… And misunderstanding.

Three days into my post, I watched him quarrel with a man who was thirty years his junior. It became physical and Mick knocked the man unconscious with a vicious straight right. The recipient- a labourer sent to work with Mick- was somewhat of a fast talker. Mick couldn’t read his lips properly and thought he was abusing him somehow.

Being by far the youngest on the firm (the foreman had kindly nicknamed me ‘Virgin’)- I was duly appointed the old man’s next assistant/victim. Hold the ladder, make the tea, avoid getting punched etc. Mick was 70 years old, about 5′ 9″ tall and immaculately fit with a thin, grey pencil moustache; he always wore his hard hat and- like quite a few of our older working generation back then- he’d seen war. He was 19 when he stormed the beaches of Normandy and was in Berlin nine months later… Me- I was an 18 year old punk who had just finished ‘A’ Levels; it was like Adrian Mole being partnered up with Clint Eastwood.

But it transpired that Mick was a superbly knowledgeable countryman, and when he found out that I fished (he saw me reading the ‘Angler’s Mail’ on our first morning working together), he started talking to me. Once he discovered I was a fellow tench fisherman, we got on like a house on fire.

We bonded over our shared interests and became firm friends; he was a lovely man and I worked with him all summer without getting one paintbrush thrown at me- which was a record, apparently.

Over tea one morning Mick took on a more messianic look than usual and told me about some of the great sport that could be had fishing Kent’s coastal marshes- specifically in their vast drainage systems where the fish live and thrive in a rich clear water environment teeming with life. He painted an image which has never quite left me. ‘Full of the juices of the land’ he said. A boggy Hades of thick weed and primeval fogs which was transformed into an ethereal netherworld twice daily by stunning dawns and dusks; all the while ruled over by ‘saltwater tench’ as he called them, due to the semi-saline environment in which they resided. Giant, jade monsters with intense, staring red eyes that grew to well over ten pounds on a natural diet of snails and bloodworms. Ten pounds!!! And all within range of our favoured style- the float- Mick said.

Tench fishing is a classic English field sport; it straddles the spring and summer and takes you to the old parts of Albion. England’s under-belly. Or rather its nether regions. Huge abandoned gravel workings- long reclaimed by nature; strange ponds; and the slow moving, brackish backwaters of the river system. Remote and sometimes- if you’re very lucky- deserted waterscapes. In many ways, it’s the fishing equivalent of wildfowling; a pure ambush sport that sees you hidden deep within remote undergrowth at first and last light. To be consistently good at it (which I’m not) requires preparation, commitment and a healthy dose of country-lore up your sleeves. You also need a good pair of wellies and the drive to walk miles into wetlands.

It’s an adventure and perhaps no other branch of angling feels more ‘Swallows and Amazons’ than tenching. Arthur Ransome was a true British countryheart who captured the feel of long English summers spent messing around by the water. This resonates all the more with me as I know that Ransome himself was also a highly enthusiastic tench hunter. The poet Ted Hughes also wrote lovingly of the discipline. After all, what could be more romantic than to sit alone at dawn in the beautiful but eerie English countryside waiting for- nay- willing your float to go under? Or perhaps whilst enjoying a pink dusk with a bottle of cider and the wisps for company? These are the great dual ceremonies of the tenching man- the feeding times, when the orange eyed ones come out from under the lillies and (hopefully) eat everything in sight…

This summer season I decided to catch up with Mick’s Marshes. They remain unaltered since Dickens’ time; in fact- they’re more desolate today because nobody lives there any more. To the best of my knowledge the last of the ‘marsh people’ moved out in the 1930’s. In that regard, these areas are similar to the Highlands of Scotland- where fewer people reside today than 150 years ago. The tench are now the undisputed masters and their empire spreads far and wide across the drains and the dykes; the deep running flood defences- some of which we built hundreds of years ago. 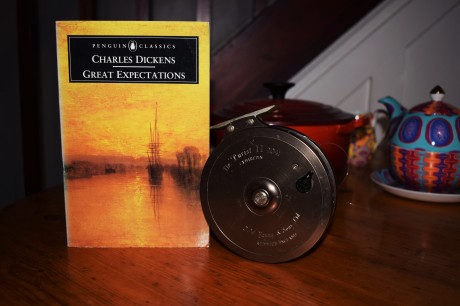 The season for the marshes is a short one. They come under the old close season rules, which means that you cannot take a rod out on them until June 16th. But in general most tench populations stop feeding (at least enough to make fishing worthwhile) some time in early August. Therefore I decided to hit them on the first day of the season and keep going until the end of July; I would try to fish three or four times per week and cover the entire ‘magic’ six weeks of the traditional tench season; as it turned out, due to events beyond my control (and quite specifically for reasons known only to the marsh), I had to cut short my campaign after only three weeks.

But this was still pre-season and I didn’t know any of this yet. Or even if there were any fish out there. I gave myself a one in four chance of success (realistic expectations) and reasoned that even if I didn’t locate or catch some fish, then I would learn and see a lot.

The first two weeks of June went very slowly. I retired to the pub each evening, sharpened my hooks and made my plans.

9 thoughts on “Tench of the Kentish Marshlands- Part One”