‘As the woodpecker taps in a spiral quest
From the root to the top of the tree,
Then flies to another tree,
So have I bored into life to find what lay therein,
And now it is time to die,
And I will fly to another tree.’

Sidney Lanier, the ‘Poet of the Confederacy’ 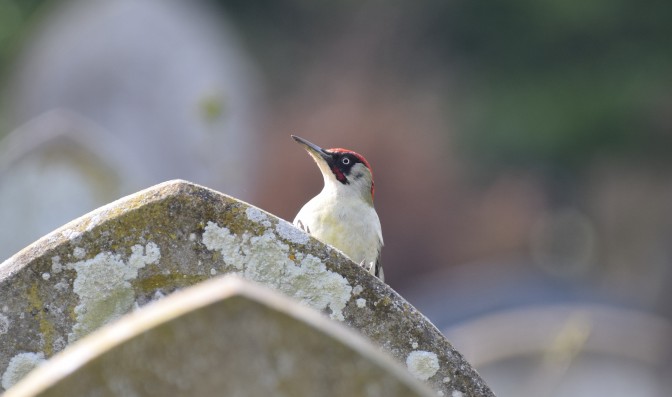 Woodpeckers have followed me everywhere recently. This is a good thing. Many Native American tribes saw the woodpecker as a symbol of vivacity and joy. It’s easy to see why when you watch a greater spotted bashing its head over and over into a tree. I find the sheer abandonment of their drumming is a beautiful tonic to modern life; it reminds me to live in the moment more often.

A difficult task for townies but one that we must prioritise. The other great sound of the woodpecker is their laughter. The green woodpeckers don’t drum as hard as the smaller, spotted woodies but they make up for it by being one of the loudest spirits in all the English outback. And they occupy enough of it- they’re rarely seen but ‘Yaffle-Birds’ (as the greens were once called on account of their laughing) live everywhere. I spend part of my teaching week working out of an old Kentish farmhouse and it’s all I can hear until last bell. In fact, there’s so many on the grounds that I hold a competition with my pupils to see who can count the most ‘yaffles’ heard during our lunch-break. Just to remind you of what a green woodpecker sounds like, here’s a little recording of one. This is over at the nearby village of Minster’s fishing ponds. The call is heard directly at the start of the video. For the remaining 12 seconds, you’ll just have to make do with the marsh winds.

It‘s a lovely location. Very classic. But if you look, you’ll find them in almost every town in England. My hometown is full of them- their chief strongholds being St Laurence Churchyard and Ramsgate Cemetery. I’ve been a bit nature-starved of late (it being the coarse fishing closed season) so in true ‘BB’ fashion, I’ve decided to ‘make a study’ of the green woodpeckers that haunt both these old yards.

To begin with, I had the most success at St Laurence. Here I heard them near constantly and at various times they bounced around on the periphery of my vision- but I couldn’t get a clear shot of one. I had no such problems when I transferred my efforts over to Ramsgate Cemetery, which must rank as England’s capital of them. Every bird photo you can see in this entry came from the cemetery, which practically crawls with green woodpeckers.

The best time for spotting them seems to be the two or three hours before dark, when they’re out collecting ants on the lawns. Their preferred method of attack is to weave between two facing sets of trees, dropping down onto the intervening grass banks to feed before disappearing back up to the safety of a favoured tree-hole. The best viewing opportunity is to stand in the main yard’s central path facing east. In the build up to dusk, the sun’s rays shine directly down from the west. All the silhouettes on the path (including your own) are nicely blurred and it’s amazing how close the birds will come without detecting your presence. When they do, be prepared for a glare or two.

As always with any form of bird-watching, what starts as light-hearted fun soon develops into a deeper curiosity which is never fully satiated. Nevertheless, it’s a huge thrill to try and solve their mysteries, or at least be aware of them. What fascinates me the most is the green woodpecker’s attempts to socialise. They have a very nuanced system of calling to their mates in the springtime, having spent the best part of the previous three seasons living completely alone. I’ve often seen several birds together over the past few weeks; although I never got a photo, I won’t forget how strange and ceremonial their interactions were- at times almost like a pagan ritual. I recently saw one land and stop dead in front of a group of monuments. It had heard the call of its mate and stood twitching among the graves before bouncing off between them, like a Mayan navigating his way though some ancient city of stones.

Nor will I forget how lucky I felt to watch. I’ve felt this sensation before in nature. Such as when witnessing the starlings congregate for their great winter murmurations. That great festival of feather and beak. Or when I watched a tribe of wild tench feeding in the clear waters of the Kentish coastal dykes, with their strange hierarchy of female leadership and various dining protocols. It’s the thrill you receive from watching wild creatures perform intimate and long-held rites. It’ll be a long time before I understand those tench. And I don’t think I’ll ever know why the starlings do what they do. As for the woodies, I’d like a little more time. After all, any creature nick-named a ‘Yaffler’ can’t be that complicated, right?

Or can it? My strangest experience in this recent campaign occurred westwards, over at St Laurence Graveyard. On the sole occasion I managed to track a green woodpecker, it landed on top of a strange, green, grave. It lingered for a while to call out but then flew when I raised my camera lens. Its stone, however, continued to call. I know it of old but the writing is barely visible on it, these days. It will take some patience, but if you click on the following images and close-ups, then you should be able to decipher what it reads. The bottom two photos are the top and lower halves of the stone, respectively. 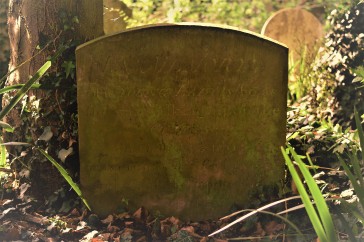 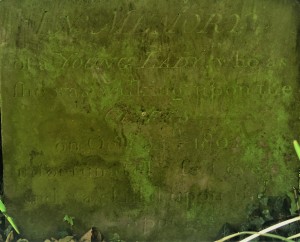 My mother used to push me in a pram through this old yard; it was (and still is) a short-cut through the parish to get over to the Maid Marion stores. She discovered the grave and told me about it when I was a little older. Its inscription is unforgettable:

of a YOUNG LADY who as

she was walking along the

and was killed upon the

It’d been a few years since I last encountered or even thought about this grave. On that occasion, it was a hot summer’s day and I was walking with relatives through the yard when we decided to look for it; its writing was much more legible back then. It seems to be diminishing. Perhaps I could send the photos off to the Church of England and see if they want to restore the inscription. It would be awful if the final resting place of this woman lost the only meaning it still has.

Or perhaps there is a deeper meaning to this stone- and to the countless other quiet nooks of this land- that our human senses aren’t capable of perceiving? One of many rhythms that we’ve long since abandoned during our reign on this planet. Some other Native American tribes, those much further out west, disagree about woodpeckers being happy-go-lucky bringers of joy. Instead they see them as spirit-guides, or ‘psychopomps’, to give them their proper (and much more sinister) parapsychological term. I heard it once said that man’s greatest failure is that he forgets.

But the birds remember. 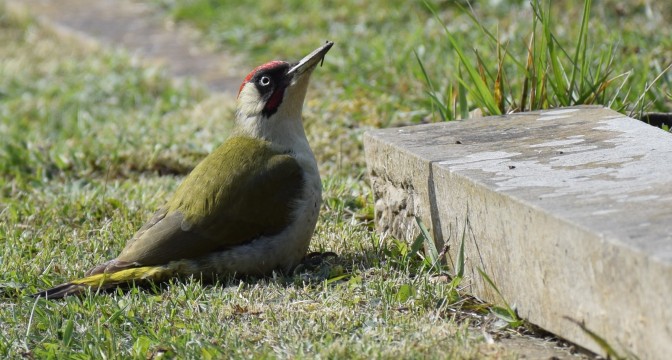 12 thoughts on “Keepers of the Green Silence”